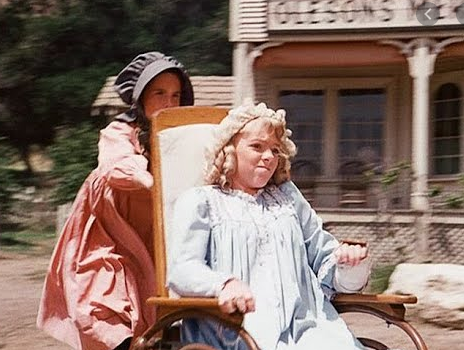 One memorable episode of the Little House on the Prairie television show was when Nellie Oleson was in a wheelchair and demanding everyone wait on her hand and foot throughout the episode.   Because what else would Nellie do other than take total advantage of the situation?

In the episode Bunny, Nellie is injured after a horse-riding accident and pretends to be paralyzed and needing a wheelchair.   Laura feels guilty and does everything that Nellie asks her to do, but she later discovers that Nellie can walk when she accidentally sees Nellie walking around normally.

While Nellie Oleson did not actually need a wheelchair since she was faking being paralyzed, it did coincide with an injury that Alison Arngrim suffered the week before the episode was filmed.  She fell off a skateboard and broke her arm, requiring her arm to be in a cast.  This was written into the show and is the reason Nellie Oleson has her arm in a cast as well.